Were you looking for militia tactical radio channel plans? (MURS is an important part).

Short distance voice and data service for use by the general public for personal and business communications. Included in Part 95 of the FCC rules (Personal Radio Services) along with the more familiar services such as CB, FRS, GMRS, etc. Since it is a VHF CB service, MURS fills the gap between the UHF FM services (FRS/GMRS) and the original "Class D" HF AM/SSB 26-27 MHz CB service.

MURS regulations, restrictions and other information

Repeaters are not allowed on the MURS frequencies per FCC rules. This includes duplex and simplex repeaters, also known as "store-and-forward" repeaters. Store-and-forward packet operation is explicitly prohibited. Unattended data (or voice!) transmission (for example, telemetry) is permitted. MURS stations may not operate in continuous carrier mode (in other words, nonstop transmissions are not allowed). FCC rules specifically mention listen-before-transmit requirements for MURS systems, including datalink networks, to reduce the likelihood of interference. Even with modest outdoor antennas, MURS data link and telemetry systems can cover impressive range and cause annoying "squelch breaking" effects on FM voice radios on the MURS frequencies, especially in urban areas and rural areas with heavy farming or light industrial users where telemetry systems are common.

The 154 MHz frequencies were moved from the Business Radio Service (Part 90 of the FCC rules) and stations previously licensed to use these frequencies with higher power levels are considered grandfathered users and may legally transmit high power transmissions. Wal-Mart, Costco, Sam's Club and other retailers that started using 154.600 MHz and 154.570 MHz back when licenses were required have continued to use these frequencies after they were made license-free. Technically this means they're "grandfathered" users and enjoy primary status on the frequency - although this is murky in the FCC rules. Wal-Mart has a habit of using 154.57 and 154.6 with carrier squelch (CSQ), even in radio congested environments like large shopping malls and urban or suburban areas. This can lead to interference issues when multiple stores are using MURS frequencies in a small area.

Motorola sells out-of-the-box MURS radios, their current model is the RMM2050 The Motorola equipment appears to ignore the usual MURS channel listing, instead programming MURS 4 and MURS 5 as channels 1 and 2. The reasoning behind this is that 154.570 MHz - Blue Dot - and 154.600 MHz - Green Dot - were previously part of the business radio service and therefore businesses already using radios or replacing old radios are more likely to be familiar with them.

Wal-Mart and Sam's Club make extensive use of Motorola MURS radios, including the channel plans listed below. Many stores simply use the default 154.570 CSQ and 154.600 CSQ frequencies. Others use a mixture of the MURS frequencies and VHF itinerant channels such as 151.625 MHz, 151.955 MHz, etc. In more congested areas, stores are more likely to use non-standard CTCSS or DCS tones to avoid interference.

Despite their age, the Motorola CP110M series, Motorola RMM2050 and RDM2070D are still very popular jobsite radios. The RMM and RDM radios should not be confused with the Motorola RDV. RMV, RMU or RDU series radios (which require licenses to use).

Some CB and ham radio operators also use the MURS frequencies due to favorable propagation characteristics, often with high power. This is against the FCC regulations but is widespread in certain areas due to the availability of open-band VHF/UHF radios, easily modified ham radio equipment that can transmit on the MURS frequencies and the adoption of the MURS frequencies by militia and prepper groups. MURS-based VHF systems range from simple handheld radios programmed with the MURS and FRS frequencies (for example, the Baofeng UV-5R and UV-82 series) to high powered mobile and base station simplex networks to simplex and duplex repeater networks.

There are reports of cross-band repeaters using the FRS frequencies and MURS, in addition to high powered MURS simplex repeaters located on mountaintops or tall buildings in urban areas. See also: CB repeaters.

Emergency preparedness recommendations include monitoring channel 3 (CB, FRS and MURS) for 3 minutes at :00 (top of the hour), :15, :30 (bottom of the hour) and :45, so 3 minutes every 15 minutes - for emergency calls/communications. FRS users may also use channel 1 as the "default" channel or de facto calling channel, while higher power GMRS users officially use 462.675 [141.3 Hz CTCSS/PL]. See the FRS and GMRS pages for more information.

Militia groups are encouraged to set up simplex repeaters on the MURS and FRS frequencies, ideally more than one (one for general use and another for "private" or "discrete" use). With CTCSS and DCS, there are literally hundreds of options and repeater access protection is possible even in urban areas with congested MURS and FRS/GMRS frequencies. You can use a different CTCSS or DCS (aka PL or DPL) tone for input and output, making the input tone "discrete" and only available to certain persons.

The cautionary statement above still applies. Prospective MURS repeater operators should monitor the channel they intend to use for an extended period of time. They should make note of any/all activity heard on the channel, with special attention paid towards the CTCSS/DCS (PL/DPL) tone squelch tones or codes in use. Even if a channel appears to be quiet with casual listening...that is often not the case. Some users only appear during specific times of the day/week. Make a list of all the CTCSS and/or DCS tones in use on your intended channel and exclude these from any simplex MURS repeater programming/channel plans you intend to use.

Because the FCC rules allow for any mode on the MURS frequencies (as long as the bandwidth restrictions are followed), MURS is becoming more and more popular for unlicensed fixed or point-to-point data link and telemetry systems. Someone scanning the MURS frequencies will often hear short data bursts (often just breaking the radio's squelch). Sometimes multiple systems can be heard on the same frequency during favorable band conditions and depending on the height of the receiving (and transmitting) antennas.

Short range on-site paging and one-way voice driveway sensors are also found on the MURS channels. Due to the favorable propagation characteristics of the 150 MHz VHF band, telemetry systems using MURS are sometimes used as an alternative to unlicensed 26 MHz/27 MHz telemetry systems. However, FCC rules permit higher power for telemetry, data links and telecommand purposes on the six 27 MHz R/C frequencies. The MURS rules specifically permit use of all 5 MURS channels for telemetry, data links or telecommand.

The MURS rules are more permissive regarding voice transmissions mixed with data (for example, the Dakota Alert systems) compared to other license-free bands. The 2 watt power limit is comparable to the 4 watt / 25 watt power limits on the 26/27 MHz RC data frequencies. It is much easier to set up high gain antennas on VHF vs. 11 meters/CB frequencies. 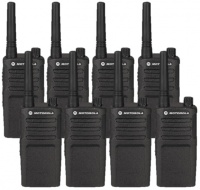