A mid-range integral rocket-ramjet, Soviet-era Russian surface-to-air missile, widely deployed with Soviet forces and exported to 22 countries. The missile provided one of the great technological surprises in warfare in the October 1973 Arab-Israeli War. 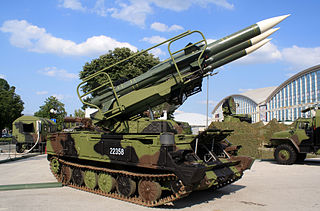 As much as 30% of Israeli fighter formations were shot down by this missile on their first encounter - 30 aircraft in the first day of the war alone. The Israelis and their American backers were not aware of and had no electronic countermeasure for the Kub's continuous-wave illuminating radars. The only effective solution was to fly the aircraft directly at the approaching missile, and then descend under it at the last moment.

The Kub 2K12 surface-to-air missile system (export name Kvadrat) had been accepted by the Soviet land forces for production in 1966. This had been developed by V V Tikhomirov at OKB-11 GKAT (later NIIP Priborostroeniya named for V V Tikhomirov). Development had begun under Tikhomirov in accordance with a decree of July 1958. He directed the work until 1962. From then his deputy Ya N Figorovskiy was responsible, with the project development being led by his first deputy, V K Grishin. The Ulyanovsk Mechanical Works began series production in 1967. By 1971 the missile had been exported to 22 countries.

The system consisted of two associated vehicles: the 1S91 SURN (self-propelled vehicle, developed by A A Rastov at OKB-15 GKAT) with the search and tracking radars) and the 2P25 self-propelled launcher, developed by A I Yaskin, at SKB-203 GKAT, later known as KB Compressor Machinery) which carried three beam-riding missiles. A battery consisted of one 1S91 and four 2P25 - a total of twelve missiles which could be brought to bear on a range of targets.

The 3M9 surface-to-air missile was developed by KB-82 Factory 134 GKAT (later GosMKB Vympel) under the direction of A l Lyapin. The all-moving wing aerodynamic scheme controlled flight by movement of the four deployable wings, with stability provided by four fixed fins aft. The semi-active, self-guiding homing head was developed by I G Akopyan at OKB-15.

Reaction time from track to launch 28 seconds. System can be active 5 minutes after arrival at site and deactivated in the same time in 'shoot and scoot' mode. One target can be tracked at a time. Three missiles per launcher.