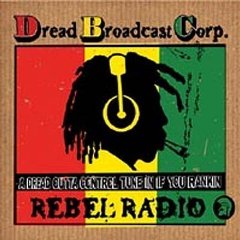 The DBC began it’s life in 1979 as a medium wave reggae pirate station in West London. Responding to an almost complete lack of representation for the black community on the radio it became the first major London urban pirate radio station. The founders, DJ Lapke and Rankin Miss P, were members of the reggae aristocracy being the brother and sister of Alpharita Constantia Anderson, better known as Rita Marley wife of Bob Marley. After acquiring a second hand medium wave transmitter from Better Badges (a button-badge manufacturer and major player in the punk scenes), DJ Lepke started transmitting QRP. Lapke: “(We) had it strong but the hill on the North Circular blocked the signal down to Ladbroke Grove... but if the clouds were in the right position it could reach as far as France!”

As is usually the case when people have a just cause, goverment interventions only served to strengthen resolve. DBC got it’s first raid on a Sunday evening over dinner. Lapke: “I invited them in for a cup of tea and they waited till I finished my dinner. They asked me: Is that your transmitter? I said yes! And did you set it up? I said yes! But they had set me up! If Id have said no then they couldnt have nicked me. I told them Im doing it for my people and they respected that... but they still nicked me.” After some time and searching a VHF FM unit was purchased to replace the confiscated MW transmitter. the Dread Broadcasting Corporation was back on the air and louder then ever.

Regular transmissions started every Friday evening from 6 to midnight. In true rebel style each broadcast was pre-recorded in a studio and transmitted from the roof of an unknowing apartment block. Miss P: “DBC was a phenomenon but the Rebel Radio method of broadcasting was also extremely dangerous, with the DJs often risking life and limb for their Friday night transmissions. Sometimes youd get stuck in the lift with the cassette decks, aluminium poles and the transmitter with people staring at us, wondering what was going on. One time the lift got stuck between two floors... It was freezing at the top of the tower block and we had to watch the rig not only for the D.T.I. but also in case other outfits (because many others had sprung up in the wake of the DBC) tried to steal it.” After several arrests and confiscations the Dread Broadcasting Corporation went off the air in 1984.