License Free VHF CB like service available in Germany only. Freenet frequencies are not permitted anywhere else.

German law prohibits using the Freenet frequencies at elevations of 600 meters (1968.5 ft) or higher (no transmissions from mountaintops, etc.) although this is apparently widely ignored.

Like MURS, the Freenet frequencies are interleaved with business or commercial band frequencies that require a regular business radio license to operate on.

Maximum power output 500mW / 0.5 watts. German law permits handheld transceivers only (only portable radios may be used). Simplex only. Repeaters are strictly prohibited although the law appears to be murky regarding interconnection between Freenet VHF devices and other bands and/or Internet linking (eg. to CB networks or PMR446 networks).

Much like the MURS service, there is some use of these frequencies with modified amateur radio or commercial equipment capable of transmitting at much higher power levels. This is usually done via the broadband or MARS/CAP mod. See also: the LADD trucking frequencies, etc. 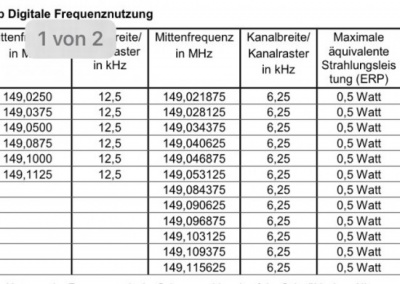