KULP The International Voice of Kulpsville

KULP is a pirate radio station active at the SWL Winterfest. The station features non-stop airchecks from Radio Azteca.

KULP bagan broadcasting Part 15, carrier current transmissions as a "Winterfest Radio" in 1991. The station aired live interviews from the Winterfest, and relays of several pirate stations. When the operator(s) were away from the studio, endless-loop carts were used to keep the aether alive until their return. Chief air talent was R. F. Friendly. It is unclear if he was in any way related to R. Fred Friendly, the CBS news honcho.

The carrier current station featured a low-powered transmitter, a power attenuator, and a capacitively coupled interface to the grid. Several reports were received from attendees that reception had been made a good distance from the Holiday Inn as they returned from dinner.

Winterfest news reports included allegedly a DXer's pool drowning, various shenanigans by clowns and muffler people, and a PSA alert for a possible pedophile on the loose. Scanner Scum were frequent guests in the station.

KULP was reportedly received at a great distance in 1993, but this was clearly a relay of a previously recorded program by a bootlegger. KULP broadcasts in "crystal clear" AM, and the international reports indicated USB mode.

The QSL shown below is unique, in that it was printed on clear acetate stock. Hence, the motto: CRYSTAL CLEAR. 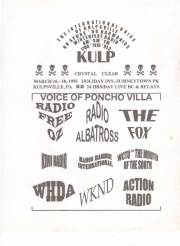