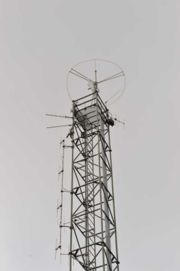 The new IARU Region 1 bandplan moves 50 MHz beacons, with the exception of beacons participating to the Synchronized Beacon Project, in a new allocation, 50400 to 50500 kHz.

Another propagation beacon was installed in 1991 at the Arctic Submarine Laboratory at Cape Prince of Wales, AK. The beacon operated on 25545 kHz (25.545 MHz) and tranmitted the morse code letter "R". A reception facility existed at Fairbanks, AK, some 900 km away. The R beacon was used to study aurora and sporadic E events at high geographical latitudes.(18)

IARU promotes a network of synchronized beacons worldwide at the lower part of the 50 MHz (6m) band. Each IARU region is allocated a 10 kHz segment, which is divided into ten 1 kHz wide beacon channels.

Each frequency can accomodate up to five beacons, which transmit sequentially in time slots (TS) 0 to 4. The transmission mode and sequence for each beacon is "PI4 - CW ID - carrier", lasting exactly one minute. SBP beacons transmit with 25W on a omnidirectional antenna. Currently a few coordinated beacons exist in IARU Region 1, in two clusters:

For more info, refer to: Synchronized Beacon Project by OZ2M.

Currently there is one regularly updated international beacon list, compiled by Dennis, ZS4BS, and is available on-line. An additional online list by WJ5O contains only 28 MHz (10 meter) beacons. 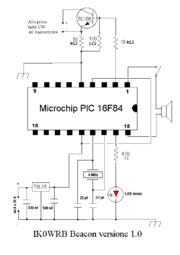