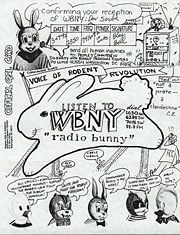 WBNY [1] is a station operated by Commander Bunny, who purports to be the leader of a Rodent Revolution. Programs consist of music, skits and material promoting rodents as superior to monkeys, a euphemism for humans. WBNY also frequently sends taunting SSTV images.

WBNY SSTV from 2007.
In the late summer of 2007, Commander Bunny announced he was running for President; presumably, of the United States, although this has never been exactly specified. Stickers and t-shirts were made available via eBay. Commander Bunny also selected Kracker as a running-mate, and is advancing a platform that, among other things, promotes drinking and the use of marijuana. There is also talk of implementing a "Fansome-free zone".

WBNY tends to use any mode available, including AM, SSB, FM and SSTV. It also broadcasts on a range of frequencies, but usually 6925. It is extremely active at times, often making several broadcasts in a single weekend. 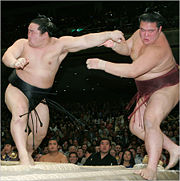 Commander Bunny faces off with Al Fansome in the ring.

WBNY has been known to broadcast parodies of spy numbers stations. A typical WBNY numbers transmission in 2004 was deciphered as follows:

It is unclear as to whether or not the present incarnation of WBNY is in any way actually related to the original station.