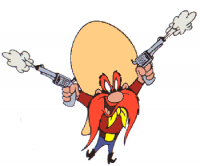 Yosemite Sam is the nickname given by DXers to a numbers station that first surfaced on December 19, 2004. It transmits on several shortwave frequencies in SSB: 3700 kHz, 4300 kHz, 6500 kHz, and 10500 kHz. The nickname is taken from the Looney Tunes character Yosemite Sam, whose voice is played as part of the unusual transmission.

The transmission begins on one of the frequencies. Ten seconds later, it is repeated on the next higher frequency, and so on for a total of two minutes. The entire pattern takes precisely two minutes, and always begins seven seconds after the top of an hour.

Each transmission starts with a data burst lasting 0.8 seconds, followed by the voice of Yosemite Sam exclaiming: "Varmint, I'm a-gonna b-b-b-bloooow yah t'smithereenies!" The clip is taken from the 1949 cartoon Bunker Hill Bunny.

The station disappeared on December 23, 2004, but returned during February 2005, on its old frequencies plus additional new frequencies, including those of time signals stations WWV and WWVH.

Reception reports seem to indicate that the transmitter site is likely in the desert near Albuquerque, New Mexico. The Albuquerque location suggests another relation to Looney Tunes: the phrase frequently repeated by Bugs Bunny, "I knew I should have taken that left turn at Albuquerque."

Mike Stark, WA5OIP and Mike Langner K5MGR discovered thath the 3700 kHz YS is transmited from the MATIC facility on the Laguna Indian Reservation, NM. MATIC is an acronym for the Mobility Assessment Test and Integration Center. (1)