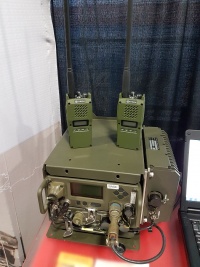 It should be noted that military operations in single channel mode are found on any frequency between 30.000 and 87.975 MHz outside the government/military exclusive use bands on a non-interference basis. Use of the 150.0 Hz CTCSS or PL tone squelch allows for frequency sharing with other users. This, combined with the fact that civilian allocations in the 30-50 MHz band use 20 kHz channel steps, compared to the 25 kHz channeling used by military VHF-FM or SINCGARS systems. The 150 Hz tone squelch is close enough to the civilian 151.4 Hz CTCSS tone that many scanners or communications receivers will decode military VHF FM traffic as having 151.4 Hz CTCSS when in reality they are transmitting 150 Hz. Use of 150 Hz also permits the operation of "relay" (repeater) setups using two radios, the appropriate cables and filters and a high elevation location. Relay functionality has been included in FM tactical radios since the SCR-300 (BC-1000) series. It was not, however, heavily used until the Vietnam war. Most battlefield relay sites use RC-292 or similar high performance antennas. The wide frequency range of modern FM radios allows for maximum flexibility in choosing frequency pairs.

The SCR-300 and similar high-HF/low-VHF radios developed in WWII and the Korean War revolutionized small unit tactics. First the capability for a platoon or similar level unit to communicate with its headquarters or commanding elements and then the capability for each man in a squad for fireteam to communicate with each other in addition to the longer-range communications capability for platoon-to-commander and platoon-to-platoon communications using FM radio have changed the battlespace forever. The SCR-300 radio provided 0.3 watts (300mw) power output, which provided anywhere from 2-5 miles of range, depending on which antennas were being used. The SCR-508 and SCR-608 family of FM tank radios featured significantly higher transmit power and more effective antennas, greatly improving range.